My Grandmother: the Altruist and Pragmatist

My grandmother, Bertha Grace Jenner, was an altruist, who had much to deal with as the men toiled amongst the wheat on the 100,000-acre property, Dunmore. An avid baker, she would feed the many Swaggies, sometimes three or four times a day with her rock cakes and scones. She would never refuse the hungry and humiliated men who would knock on her door during their search for work, sometimes lasting weeks, months or even years. Bertha was also pragmatic: “A hungry man is an angry man” Bertha would tell her 5-year-old daughter Averil. The young mother had less sympathy for the snakes with which she also needed to deal, sometimes on a daily basis. Tiger, brown and black, the large property teamed with each species. “Fetch the gun and shells!” Bertha would yell to her daughter.  Without hesitation, the five-year-old would grab the 410 single barrel shotgun, so large for her small frame that it would drag in the dirt behind her before reaching her mother. The shells she carried in her other hand. Once reached, Bertha would take hold, load and aim at her target, blowing the reptile into oblivion.

Waste not Want not

Like most families during the Great Depression, things were made from scratch and you knew from where they came. Provenance was not a buzz word but a way of life. One knew that mutton came from the sheep in the paddock, because one slaughtered and processed them; milk from the cow at the gate, as one milked it and honey from the bees in their hives because one had braved their sting to rob them. My father’s smouldering smoker would generate enough smoke to calm the colony while he and my grandfather, Sid, carefully extracted enough precious honeycomb for the family’s bread but not without leaving a sufficient supply for the bees to sustain themselves. There was no greed nor waste. In fact, ‘waste not want not’ was a common mantra and my grandmother Bertha knew how to make the most of the family’s weekly meat supply of half a sheep. There was roast mutton on Sundays with the leftover re-imagined as rissoles or shepherd’s pie, the latter all minced up with carrot and onion and embellished with a topping of creamy mash. The brains were coated in breadcrumbs which had been made from the leftover bread and then lightly fried. The liver was fried and topped with gravy; nothing was wasted. Bertha could also bake, with cakes and sponges so light and fluffy she would win nearly every award possible at the local Manilla show. “No point even entering if that Jenner woman is entering again this year”, the local CWA women would say. My father would be eating scones for a month as Bertha baked her way to the perfect dozen: light in texture, golden in colour and uniform in shape. Her daughter in law and my mother, Faith, would learn to cook from Bertha in the early years of her married life: roast lamb, rissoles and shepherd’s pie amongst the Rennie Jenner family favourites; “All meals fit for a king”, my father would say…

The Essential Workers of the 20th Century

By the early 20th century, Manilla in north-west NSW,  had become one of Australia’s important wheat belts and Dunmore was a major wheat producer. Droughts were common throughout the area and although harsh for farmers, were perfect for wheat as the soil had rested, ready for the next seeds. When the rain did come, the land was fertilised by seepage from the surrounding limestone hills. The oxide secreted from the limestone helped to adjust the  pH value of the soil, therefore enhancing its nutritive value. During Syd’s 30 years on the property, there had been many droughts and many bumper crops and the 1940s had been no exception. In 1946, the drought had been so severe that the crops had failed to produce even enough wheat for the farmers’ requirements. In that year, it was stock work only for the Jenner men, who laboured a 6-day working week.

When the heavens did open in 1947, the Dunmore wheat crop sprang to life. This meant the Jenner men: Syd, Frank, Percy and young Ren would need to work both the stock as well as wheat. Mungo Parks, the owner of the property, was a hard, burly man who did not cut much slack: “no whistling Rennie, keep your mind on the job”, he would say. The Jenner men did just that. During the wheat season, they would do stock work during the day before turning to the wheat at sunset. Although mechanization of the industry had seen the transition from horse to tractor, making the work less labour intensive, the tractor lights allowed the men to work beyond their 11hour day. While Syd  stripped the wheat with the tractor-drawn Mccormick Header, the other men would feed the grain into bags hooked to the opening of the box. The open bags were then dumped in the paddock ready for the morning’s sewing. Then black from the dust and dirt that had stuck to their sweat like flies to a cowpat, the men would return to Killarney as dark as the night that accompanied them home.

In the morning, the Jenner men would return with jute twine and bag needles, to sew and ram the bags. Frank, Percy, Syd and Ren would sew the required 22 firm stitches across the bag so the precious bushells could not escape. The men would then lift the 180 pound (82 kg) bags onto horse and cart for transport into the Manilla railway.

The Jenner Gang’s toil among the wheat was not only needed domestically but also globally during the bumper crop of 1947-48;  with rations still in place following WWII, France and Germany were also recipients. In addition, German crops had failed due to drought and China was also going through drought and famine. The Jenner men’s toil amongst the wheat had made a significant contribution to a much needed commodity and in the process become the essential workers of the 20th century.

Samuel and Eliza’s act of Benevolence 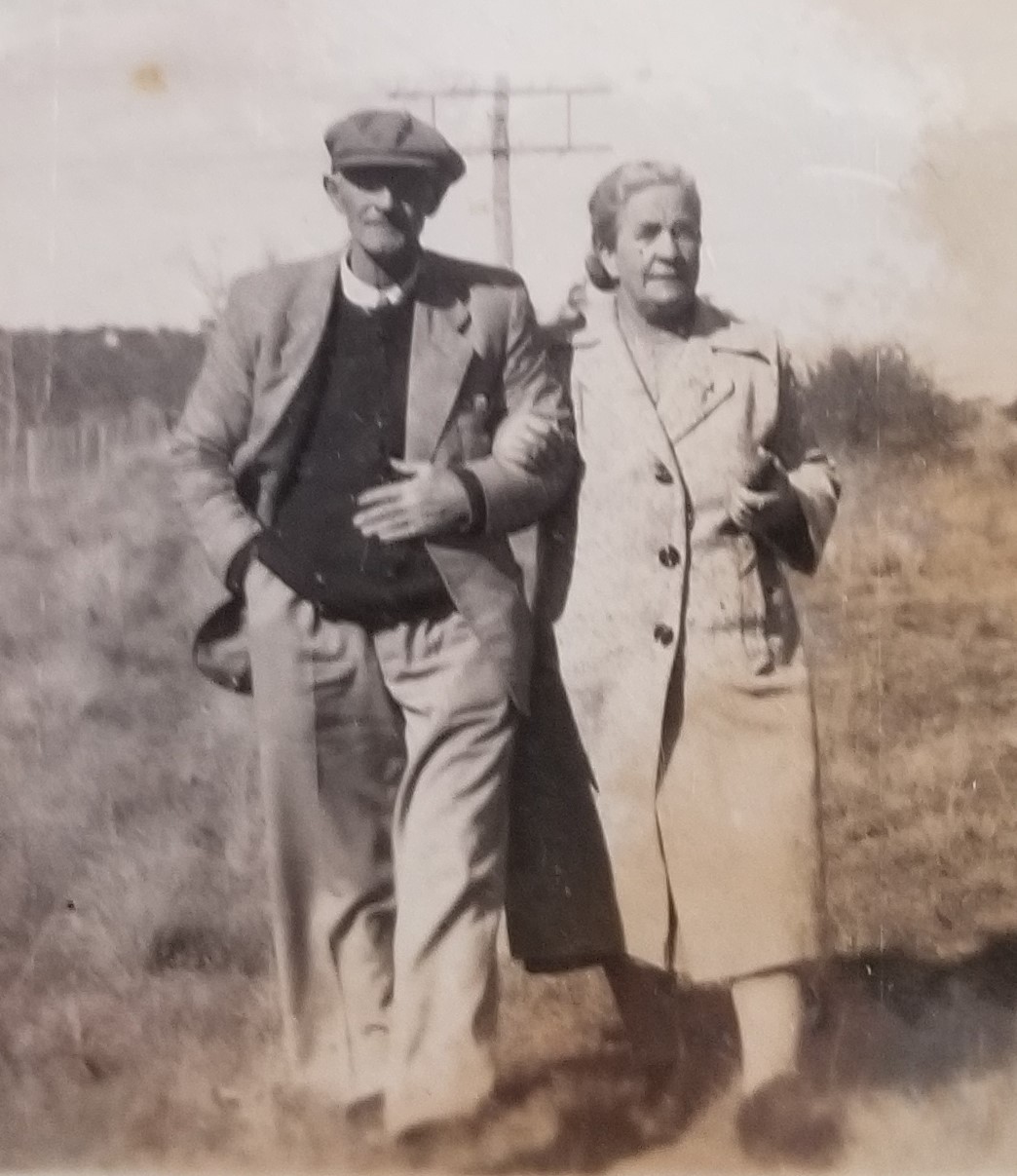 Samuel Ashley’s service in the Ninth Field Ambulance during WWI, meant he found it hard to settle into civilian life following his return to Australia aboard the Euripides in March 1919. Consequently, the Ashley family was constantly on the move. Beryl Faith and her six siblings would live in eleven different abodes during their youth and young adult life.

Samuel barely spoke about his war experience as driver and stretcher bearer on the Western Front in France from 1916 – 18. However, daughter Betty recalls, ‘I do know that dad had been exposed to gas during the war and this had led to his cancer later in life.‘ The German army widely used mustard gas which could kill by blistering the lungs and throat if inhaled in large quantities. Winifred Owen captures its horror in his poem: Dulce et Decorum Est:

In all my dreams, before my helpless sight,

He plunges at me, guttering, choking, drowning.

The family also knew that Samuel would pick up his mates on the battlefield, some so badly injured, they were only identifiable from the tags around their necks. Identity or dog tags were worn by all members of the Australian Imperial Forces. The data they carried with them contained their name, contacts and importantly religion, so they could be buried appropriately.

Samuel never forgot his mates or their suffering, which would visit him regularly and at times overwhelmingly. Sometimes at the Ashley dinner table, Samuel would fall silent and weep. “I wish you could have known your father before the war; he was a different man,” Aunt Louie would tell her niece Faith.

In spite of the trauma, Samuel never forgot his humanity.  It was during the Ashley family’s Lurnea Post Office days, that Samuel and Eliza’s seven children would learn to stand up for what one believed to be right. The family had two sets of neighbours at the time: the Phillips’ and the Flamish’s. The former, Molly Phillips, would turn out to be the cousin of Beryl Faith’s future husband, while the latter were German immigrants who had sought refuge in Australia following WWI. They were poultry farmers who were valued by the Lurnea community.

Although the Flamish’s were naturalised Australians, it was during Faith’s twelfth year that she would learn of her neighbours’ plight; they had received a letter from the Commonwealth of Australia stating that under the Alien Act, they were considered to be an enemy of the state and were to be interned due to their German heritage. With much hope, the Flamish’s had turned to Samuel and Eliza for support. They were hopeful that their neighbours would go to court to speak in their favour. Without hesitation, Samuel and Eliza agreed to help their neighbours.

Samuel’s war experience had neither hardened him nor made him less humane; instead, he responded with humanity, empathy and decency.  Samuel and Eliza’s act of benevolence had kept one German-Australian family out of the internment camp and in the community to which they belonged.